Our local primary school Principal suggested that we should put pen to paper and document this moment in history, to create fodder for the historians of the future. So I’m doing my bit for posterity.

I feel a bit like I’ve learnt quite a lot about humanity, and society, over the last month. 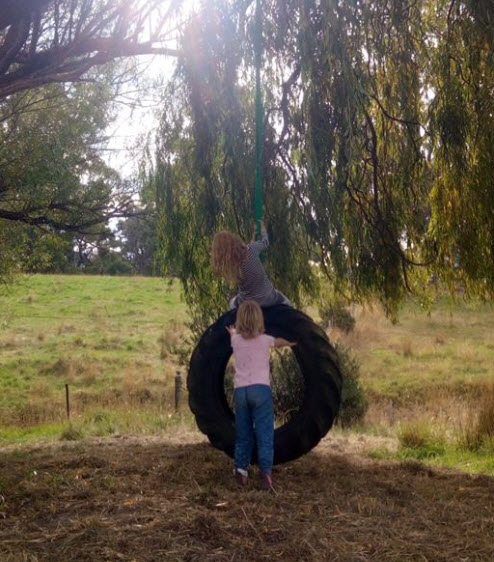 The tree swing I made for a 9yo birthday that had less fanfare than usual thanks to self-isolation.

Our family has been in self-isolation for over 3 weeks – we started 3 days after Australia hit 100 cases. We’ve been to the supermarket once, I’ve taken machinery parts for repair, and there was one run to Hobart to make arrangements around my 17 y.o. daughter’s choice to run the gauntlet in the city. That’s it. We’re coming into the fourth week of the younger kids being schooled at home. Our living arrangements have been juggled – my partner’s mother swapped places with my 17 y.o. daughter, as my daughter was determined to meet her commitments to practise for a Spiegeltent gig that – 3 weeks ago – the likely cancellation of was not obvious to her. So she was living in Hobart and my partner’s mum lived with us, as she was keen to avoid the higher risk. My daughter – with the gig cancelled, and school and uni moved online – is now in separate self-isolation for her second week prior to coming home.

On one level, for me personally, not much has changed. I’ve been working on the farm almost exclusively for the last 12 months anyway. My partner has lost work (events management is not the best source of job security in a pandemic), but we’re feeling like we’ll be okay. We’re feeling very grateful on many fronts.

Our 9 year old asked her mum how long this is likely to go on. Mum answered hesitantly, “well no-one’s really sure, but it will probably be a really long time, like months”. The news was received like all her Christmases had come at once.

So I feel like we’re on a bit of an oasis watching a storm going on elsewhere, even though I fully expect to be personally affected by it in the near future. It’s getting closer – I already know people who have friends fighting for their lives in ICU beds, whereas a couple of weeks ago it was all nameless numbers. The degrees of separation are lessening.

We started self-isolating well before it was official advice to do so, mainly because of the arguments outlined in this opinion piece. Up until then I hadn’t paid a great deal of attention to the news. That piece got me reading. We cancelled birthday parties and hunkered down.

At the time I’m writing this, there are 82 known cases of COVID-19 in Tasmania, and the PM, chief medical officer, and some Premiers, are announcing they’re hopeful that that we may be seeing the curve flattening. I hope we are too, but I don’t think we’re anywhere near that. That would be something like Trump’s miracle, and while Scott Morrison says he’s always believed in miracles, even he waited for the election results before claiming one. In the US their own medical modelling is now saying they may lose 240,000 lives, while three weeks ago, Imperial College modelled over 1 million lost US lives on a best case scenario. Australia did start to put the brakes on sooner than many, but it was done in a very sporadic and half-measures approach, and our testing criteria have been – and still are – very limited. Even Germany, who now have the capacity to run 50,000 tests a day, has been told it needs to hit a million tests a week to avoid a mass outbreak. Here in Australia, we’ve run less than 300,000 tests across the entire outbreak. In Tassie, it’s less than 3000. So, sadly, I think the worst is definitely yet to come, and effectively all we’ve tested so far is a sample of other countries’ infection rates, because we’ve really only been testing tourists. But I’d be very, very happy to be proven wrong.

Initially it struck me that the pandemic was like climate change in miniature. The basic science was already known (dozens of studies on coronavirus had already been published by March), experts were giving stern warnings, it had already played out disastrously in other countries, but the West dismissed it as other countries’ problems. And then it came. Because a pandemic, like climate change, doesn’t care about your culture or your political persuasions. And climate change doesn’t care whether you believe in it or not, and neither does coronavirus (and yes, I’m still hearing of people who “don’t believe in coronavirus”).

There seemed to be some dark poetic justice to coronavirus: the younger generation’s dogged adherence to a lifestyle posed an existential threat to the older generation (‘payback’ for climate change), and it survives longest on manmade objects, like plastic. I drew some hope from the idea that we may be educated by nature. There was a great meme floating around Facebook suggesting that Earth gave us the virus to get us to practise living more simple, less environmentally-damaging lives, as we’ve been saying we can’t possibly do, to prevent climate change. Perhaps we would learn from it. But then I remembered the toilet paper.

Political commentators have congratulated our government – free-market, neo-liberal government – for ‘putting aside’ its ideology to prop up the public with massive welfare payouts and subsidies. It seems to me that if you’re in government and you have to “put aside” your ideology in order to effectively govern in a time of crisis, you’re holding on to the wrong ideology in the first place. And it seems to me that the willingness of otherwise anti-welfare governments who typically represent business and ‘the big end of town’, to open the purses to the public at a time like this, is more a reflection of the fact that they know that “trickle down economics” is an inversion of the reality; their wealth is accumulated by a tricking up from the less fortunate. In America, especially, throwing money at the public seems as much self-preservation as genuine care; a population with no work provides great fuel for a revolution.

And then there’s the crazily-mixed messaging around the virus itself. Scott Morrison blasted Bondi beach goers soon after he’d proudly stated he’d still go to the footy. Boris Johnson thought everyone would be “pleased to know” that he was still shaking everyone’s hands. A country that allowed election agendas to be governed by “stopping the boats” also allowed an infection-ridden cruise ship to dock. For weeks the WHO had advised that there was no reason for the general public to wear masks. Now the leading public health body of (what used to be) the world’s leading economy is telling its people how to make a mask from a T-shirt and rubber bands, but Trump says he still won’t be wearing one. Trump and State Governers argue about who needs how many ventilators, while doctors resort to writing opinion pieces to get the message through that even if you need a ventilator and get one, you’re still probably going to die. Animals have contracted it from humans, but we’re told we can’t contract it from animals, even though the first case was thought to have originated from a bat at a wet market (which scientists have been warning about for over a decade).

I personally grapple with what this all means, or should mean, or what I should think about it. 150,000 people die in the world every day, without coronavirus in the mix.  In that sense, this pandemic is no big deal. And yet, it’s a really big deal. It’s a totally natural event that exposes the fragility of our unnatural systems and undermines our expectations and sense of entitlement about our quality of life and indeed – and perhaps more challengingly – how much time we’ll have alive.

We seem to attach a different kind of meaning to death at close quarters. In that sense, a pandemic will be a grand ‘leveller’, and put us on the same footing: all vulnerable. But no, we are not. We are nowhere near as vulnerable as those living in squalor, refugee camps, or cramped housing.

In the end, I guess we’ll all do what we can to keep ourselves and our families safe, and the fear and grief that we will deal with within that sphere over the coming weeks, will taper off into either a more philosophical, empathetic grief, or a more philosophical callousness, for the suffering that goes on at the fringes of, and well beyond, that sphere.