And yes, I’m dating it with a month, in case there’s another one this year, because it’s been that kind of year.

I checked the river level around 3:30pm Thursday and it had just risen into the paddock a few feet. The bureau had a moderate flood warning issued, but after it rained almost constantly from about 6pm to midnight I was thinking that it wasn’t going to be moderate. I was wired and couldn’t go to bed so flicked through the telly channels and found Titanic on. Already so dated it was rather amusing, but so many parallels to our current situation with climate change that it was really quite upsetting to watch. And when I opened the door at 1am and looked out in the cloud-muted moonlight, sure enough, I could see the river where it shouldn’t be, and that had an additionally freaky feel to it having just watched a passenger liner sink.

I took a stroll with Fergus – who was very confused to find water around his knees in all the wrong places – and scoped it out. By 1:30am it looked to me like it was about a foot below the highest I’d ever seen it, and I didn’t know if it had peaked or not. I took the camera out early this morning and at a guess I’d say it peaked here around 7am – there were water marks around known landmarks that suggested it had reached the highest I’d ever seen it, although only by a few inches.

Here’s some video and pics. 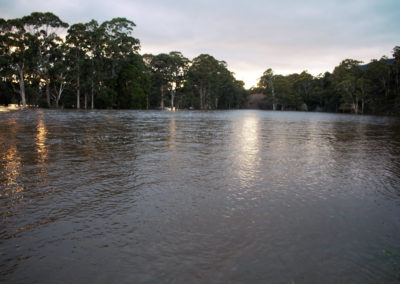 This is one of our biggest hay paddocks almost completely underwater.

Gauging depth from the water marks on the poles. 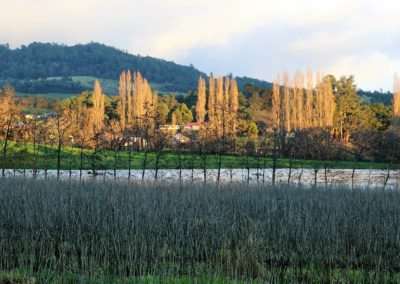 In the middle of this pic is Glen Huon Primary School enjoying new water views. Dormant blackcurrants in the foreground. 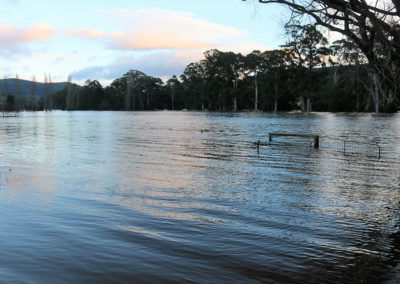 Note the gate… won’t be going in there for a bit. 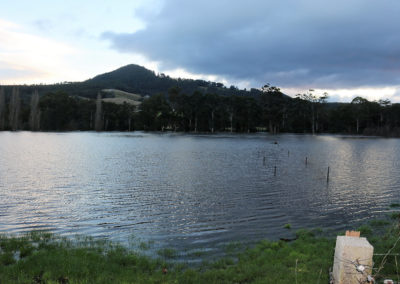 This paddock is where our old orchard stood, and after that, around 9 acres of blackcurrants. Now several hay paddocks. 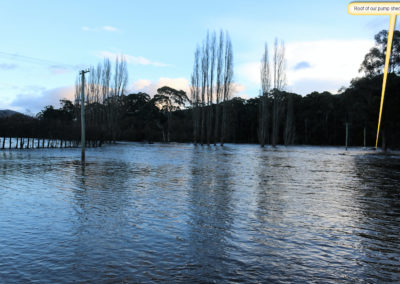 The meter box at the front of the shed is supposedly above the high water mark for flooding. It looks to me like it was partly underwater this time – we’ll see if there’s a puddle in it when the water recedes. 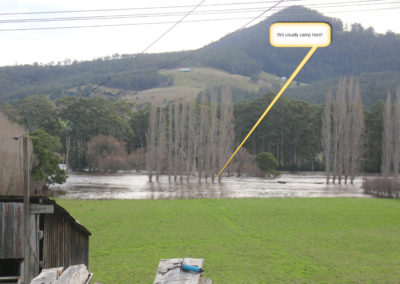 This is where we often ‘camp’ with family and friends. 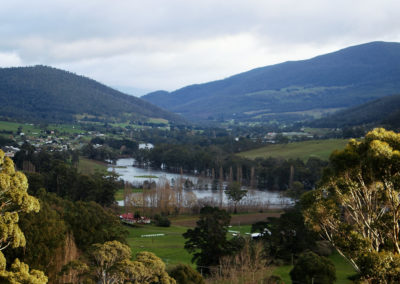 The farm from above

A view showing the context from higher up. 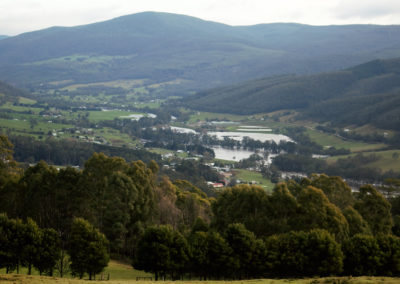 View from the top of the farm down toward Glen Huon and Judbury. Again, the school is the yellowish building with the red roof just out of the trees.