I found my eyes welling with tears at the climate rally today. I wasn’t really sure why. Because we’re 30 years too late? Because I’m witnessing the end of civilisation as we know it, with the last gasp attempts led by children? Because we could’ve been so much more?

I was astounded that the young people speaking would say “I hope that my children…”  Really, you’re still planning to have children? And speaking to a well-informed, agriculture-linked person recently, eyebrows were raised when my partner suggested the river flats here on the farm may be underwater soon.

I think this explains a lot of the inertia around climate inaction: people – and even relatively well-informed people – just don’t understand that this round of climate change is likely to be rapid, not gradual. And that’s not surprising; my advanced science teacher told us in the 1980s that “the greenhouse effect” (as the single facet of climate change was referred to back then) would not really affect humanity in our lifetime.

The current science is showing that he was grossly wrong.

Well, that’s pretty much the thing… it’s like a big slingshot that’s been stretched back and it’s just been released, and the rubber is springing forward at a fast rate. Which is why each year breaks new temperature records, and why the five hottest years in recorded history have been in the last five years.

It’s a bit like the phenomenon we see every year, called ‘seasonal lag’, where “as the days lengthen, the cold strengthens”. Why is that? Why do temperatures plummet in July and August, just as the days are starting to get longer, with more sun? Well it’s nothing to do with the longer days, but all about the shorter days that just happened months back, and the fact that it takes a couple of months for the planet’s climate controllers (like the world’s massive heat-storage system – or ‘heat sink’ – the ocean) to ‘catch up’. The ocean continues releasing residual heat into the atmosphere long after the shortest, darkest day has happened in June, which provides a bit of a buffer. Just like when your woodheater goes out at 5am but you don’t notice it until you get up, because the house is still warm because the bricks around the fireplace have been letting out their stored heat. The ocean is like your bricks. But if you don’t light the fire again, you’ll certainly notice it before 5am the next morning… that’s the July and August of winter’s seasonal lag.

The opposite is of course true also – the longest day here is in December, and the sun is beating down solar energy into the earth’s heat reservoirs, which continue releasing that stored heat well past December, which usually makes February the hottest month.

Something similar is happening with the climate overall. But it’s not the climate catching up to solar radiation storage, but rather to the effects of stored atmospheric carbon.

And the climate has a lot of catching up to do, because we’ve shot the carbon dioxide levels that high in the space of a few hundred years. Long term global climate changes usually occur gradually unless something pokes a really big stick into the system – an asteroid collision, an enormous volcanic eruption, or a species evolving which develops technology that’s capable of releasing millions of years worth of stored carbon in products like coal, into the atmosphere in the space of a few hundred years. We’ve poked an enormous stick into the system.

There’s still lots of antarctic ice to melt, lots of permafrost to melt, lots of ocean left to acidify. And add to that the scary concept of feedback loops. Y’know when you’re at a concert or a speech and the public address starts screeching? That’s the result of sound going into a microphone, being amplified, coming out of the speaker and going back into the microphone, in a continual loop that grows the screeching until someone does something to stop it. The same happens in the climate. Here are a few feedback loops that we already know about:

So, yeah, in the 1980s it may have looked like climate change was going to be a far-distant issue. But now things are accelerating, and ice is melting far faster than predicted, because scientific predictions are conservative, and feedback loops aren’t conservative and probably aren’t anywhere near fully known let alone fully understood.

Which is why I wouldn’t be at all surprised to see the farm underwater in the not-too-distant future. Because we are ALREADY at 400ppm, the level at which sea levels were 10-25m higher 3 million years ago, and we’re on track to cross 500ppm in decades. Here’s what the farm looks like now, and with only 20m sea level rise: 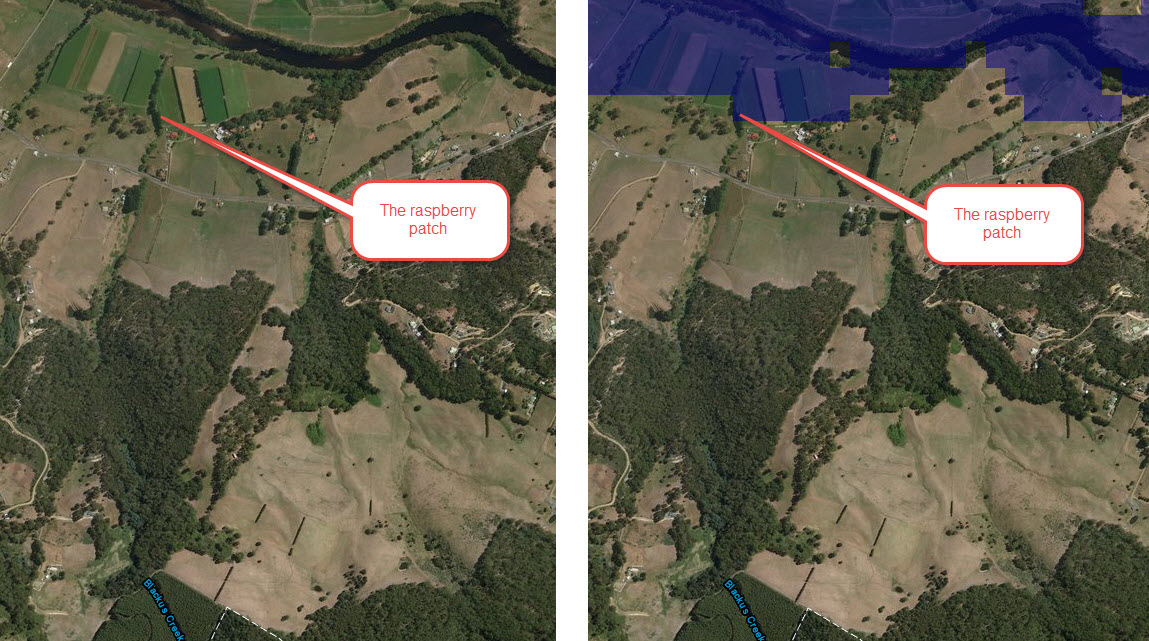 Interested in seeing what 20m looks like in your neck of the woods?  Try this. It’s an awesome way to spend a Friday night.